August 2018 Holidays: What You Can Expect on Your Paycheck?

August 29, 2018 — August is undoubtedly the month where Filipinos express their love for heroism, for not only does the country have celebrations like National Language month, but it’s also filled with holidays that commemorates the sacrifice and patriotism made by some of the most prominent figures in Philippine history — But the question is: How would holidays reflect on your next payslip once it comes to a close? 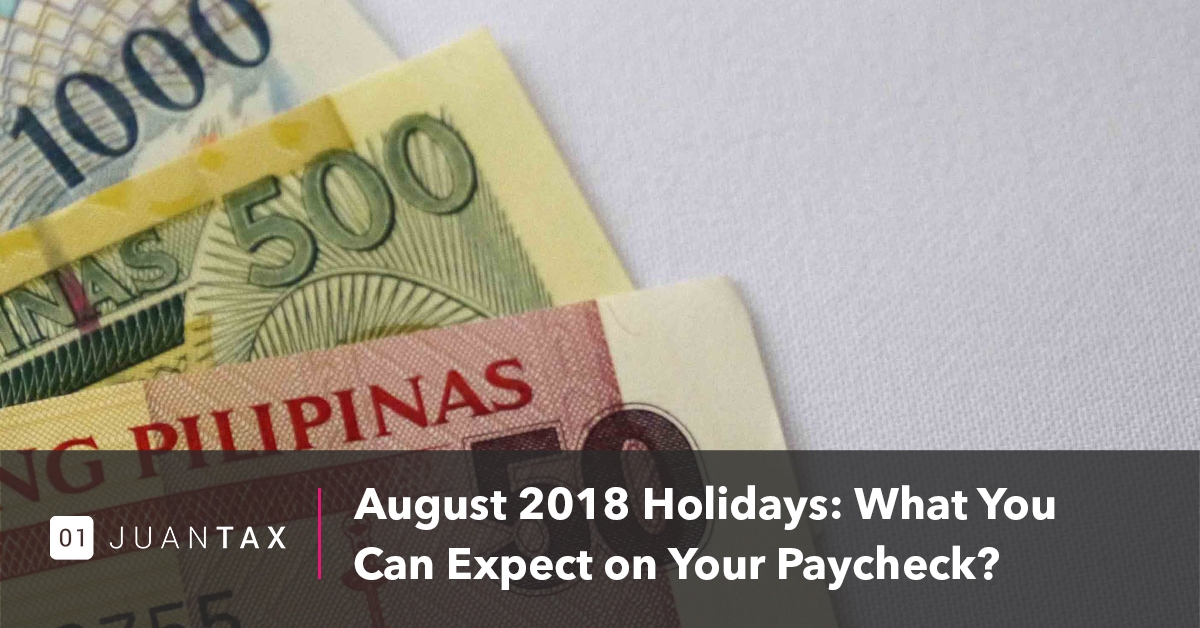 In this article, we will be providing information about the holidays that happened in August as well as share how will these holidays affect your salary as an employee. We’ll also explain the role of these so called “holiday pays” in your taxes in the form of Withholding on Compensation, and how JuanTax can help you in filing these kinds of taxes.

Three (3) holidays were observed during the month of August, namely:

Every 21st of August, we commemorate the heroism of former Senator Benigno “Ninoy” Aquino, who is also the husband of the late former President Corazon “Cory” Aquino.

Under Proclamation No. 556, President Duterte also declared August 21 as a regular holiday called Eid al-Adha, which roughly translates to “Feast of the Sacrifice”. This event revolves around Ibrahim’s sacrifice of his son, in order to show God his obedience (which is also the counterpart of Abraham’s story in the bible).

Every 27th of August, we’re also celebrating National Heroes’ Day where we get to honor the life and times of all the heroes who fought for freedom under Spain’s conquest for about three hundred years. It also marks the anniversary of the Katipunan’s Cry of Pugadlawin, which signaled the beginning of the Philippine Revolution in 1896 led by Andres Bonifacio.

Regular Holidays are holidays that have a specific or fixed date. Best examples of these are Christmas Day (December 25) and New Year’s Day (January 1).

While Special Holidays on the other hand, are much flexible holidays in which occasions most of the time, are being implemented via Congress and is being declared by the President through proclamations that are being circulated within government websites.

Below is an infographic that will give you an idea on how to calculate your salary once it fall to either of these types of holidays:

How Does this Affect Your Taxes?

Aside from the salary that you’ll be receiving, holiday pays also needs to be included within BIR tax forms such as 1601-C or Monthly Remittance Return of Income Taxes Withheld on Compensation, which is a tax requirement that needs to be complied by the employer.

Compensations are given by employers (acting out as withholding agents) to their employees is an important factor that should be specified in your 1601-C form.

In this tax form, aside from the total amount of compensation, you also need to enter things such as Overtime Pay, Night Differential as well as Holiday Pay within section 16B of your form.

For those busy business owners, Juantax can easily help you in processing your withholding on compensation in no time!

Just upload the list of your employee details and compensation manually or better yet, bulk import information through a CSV file format.

Straight forward functions in Juantax would make it easier for you to get this done in no time — and hey, once employee details are uploaded, there is no need for you to do this the next time around!

You’ll also be able to get help from our dedicated support team 24 hours from Mondays to Fridays!

If you’ve already signed up with JuanTax, remember that you can easily get detailed instruction on generating 1601-C forms by visiting our Help Center and stay tuned for more updates here!

JuanTax is a Philippine-based cloud tax software which helps businesses in achieving compliance with the Bureau of Internal Revenue (BIR) when it comes to filing local taxes including Income Tax Returns, VAT, Percentage Tax and Withholding Tax.