TRABAHO Primer: The Road Towards Second Package of Tax Reform

August 14, 2018 — We are just months away before all five packages of tax reform are implemented into law by the administration. With the second package named as Tax Reform for Attracting Better and High-Quality Opportunities, or TRABAHO, being endorsed for plenary discussions at the House of Representatives, the road for a much fairer tax system might be up for a smooth sailing. 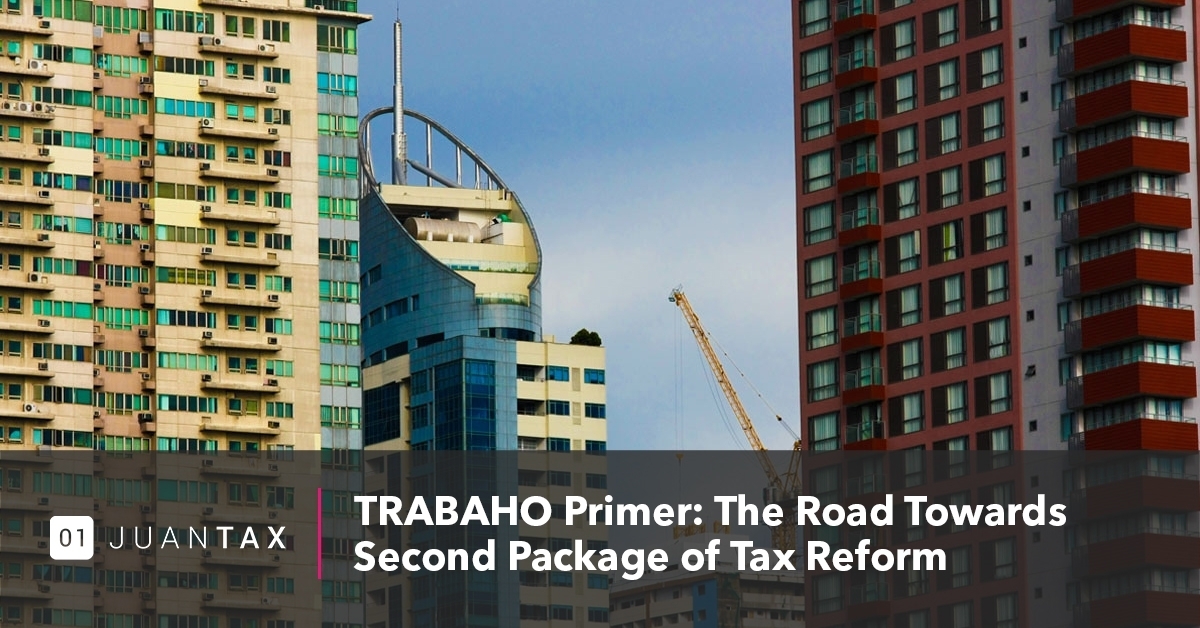 In this article, not only we’ll recall the events leading to the approval of TRAIN 2’s substitute bill, but we will also explore its complexities while we wait for its full implementation in the year 2021.

The Road to TRABAHO

In addition to the Senate’s cold outlook on the tax reform proposal, the Philippine Economic Zone Authority (PEZA) and the Board of Investments (BOI) expressed opposition to the finance sector’s plan of trimming fiscal incentives. According to these agencies, the impending implementation of TRAIN 2 would cost investors who want to build businesses within the country. PEZA even stated that the proposal is a clear violation of Section 10 of Article III of the 1987 Philippine Constitution, as it promised that both local and international businesses who will invest within PH economic zones will enjoy the privilege of having incentives:

“This constitutional provision prohibits the enactment of any law that would impair the performance of contractual obligation,”

“Since the incentives in the registration agreement are obligatory on the part of the government, it cannot be revoked by a subsequent law for it will result in the violation of the non-impairment clause which is guaranteed by the Constitution,”

When asked regarding the TRAIN Package 2 prioritization, newly-appointed House Speaker Gloria Macapagal-Arroyo sounded off her thoughts with a resounding “yes”. She also stated that TRAIN 2 should be called corporate incentives reform for a reason.

“It’s not called TRAIN-2 because TRAIN-2 is misleading. This is going to be a corporate incentives reform. Remember in the SONA of President Duterte, it’s there,”

In a recent statement by Senate President Vicente Sotto III, he mentioned that he’s willing to sponsor this package submitted by the Department of Finance (DOF) and give this one a major push to the palace — if and only if the provisions would not lead to higher tax rates, based on complaints from larger companies:

“It could be good because it would not impose new taxes, but we have to be steadfast because some big corporations have started to lobby.”

The Senate President even filed Bill No. 1906, also known as the Corporate Income Tax & Incentives Reform Act, which was designed to review and streamline existing tax policies involving businesses in the Philippines.

“It is high time for the government to come up with a tax incentive system that is performance-based, transparent and time-bound, in order to ensure that the Filipino people will gain from every peso that the government gives to the firms registered in the investment promotion agencies.”

Despite the confusion surrounding the proposal, the House Committee on Ways and Means still managed to approve TRAIN Package 2 with a panel assembling to discuss and create a substitute bill combining the suggestions gathered from 5 consecutive hearings consisting of the DOF and lawmakers.

Nonetheless, they wanted to be certain that this second package of TRAIN would not worsen the inflation issue, as per the effects of the first package.

According to Quirino District Representative Dakila Carlo E. Cua, despite the sudden name change, this measure still aims to remove the burden amongst companies and provide more opportunities for all:

“We are moving to an incentives regime that is biased to development outside of metro or urban areas. We are also lowering the burden on businesses so that they can expand and provide more employment opportunities.”

While Finance Undersecretary Karl Kendrick Chua stated that one of the impending effects of lower corporate income taxes would be a 62 billion peso revenue loss on the government’s side upon the bill’s full implementation in 2021.

One of the main agendas of the TRABAHO bill is to cut corporate income taxes.

According to a report by the National Tax Research Center (NTRC), unlike its co-ASEAN folks such as Malaysia (24%), Indonesia (25%), Cambodia (20%), Brunei (18.5%) and Singapore, whose Regular Corporate Income Tax Rate is 17%, serving as the lowest among ASEAN countries, the Philippines show a different story — with a whopping Corporate Income Tax (CIT) rate of 30%. 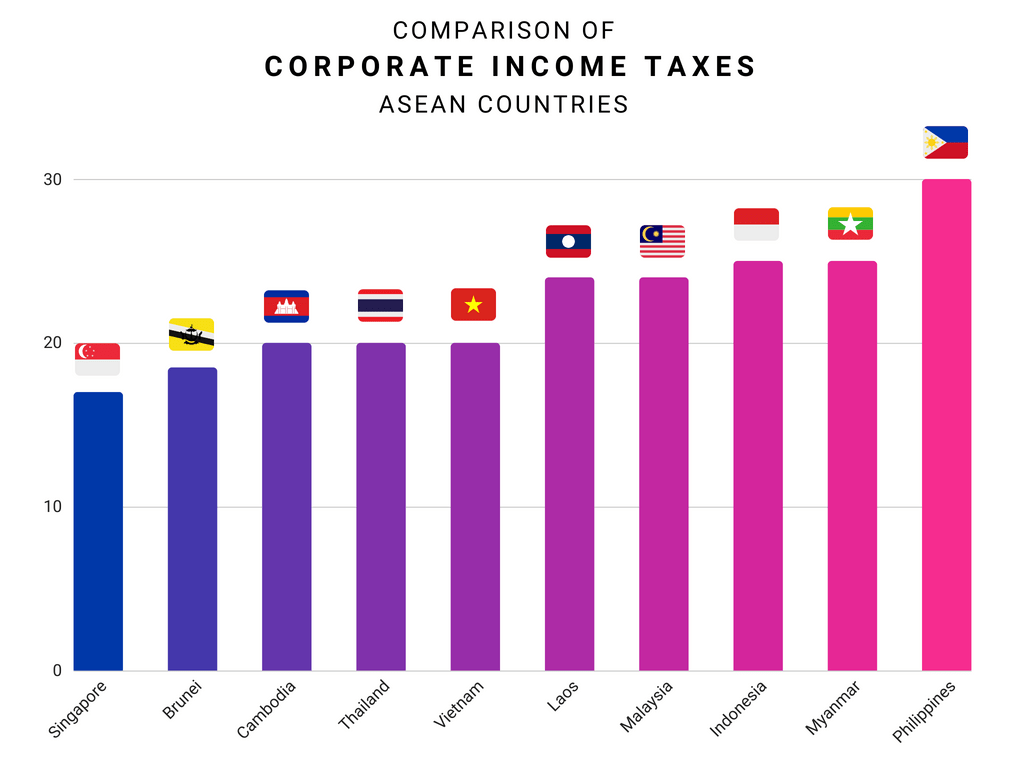 Based on the chart above, Philippines has the highest corporate income tax rate in contrast with its ASEAN peers, making that fact alone a stressful one to digest between large companies. This bill is hoping to alter this reality by slashing down corporate income taxes to 2% yearly by 2021, and even reach 20% by 2029. 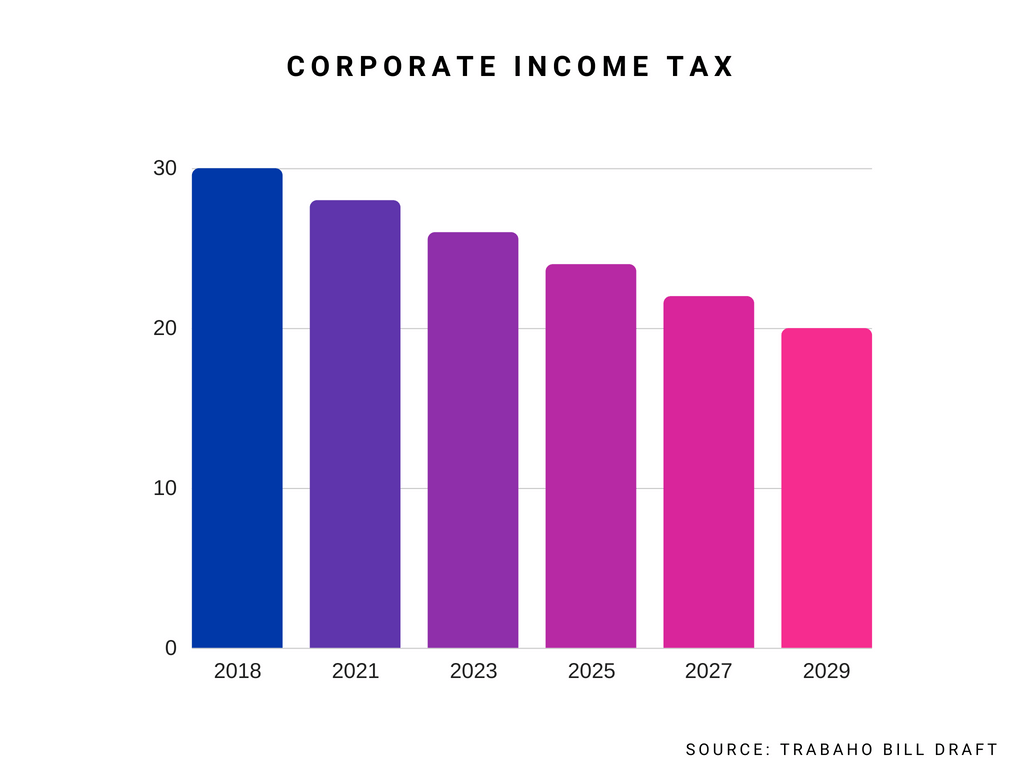 Fiscal incentives serve as an instrument (e.g. tax reduction, incentives, grants and subsidies) applied by the governments to support various activities of individuals and organizations who would like to invest within a territory.

These incentives are designed to attract business investments, create jobs and increase the number of capital transfers. Two good examples of this are the Income Tax Holidays as well as the 5% Gross Income Earned (GIE) tax. Currently, if you have no incentives, you’ll need to pay the current standard 30%, while those with incentives will only have to pay around 6 to 13% — which is a great selling point for investors.

Currently, the Philippines have several investment promotion agencies (IPA) that are authorized on receiving these incentives which include the PEZA and the BOI, serving as two of the biggest IPAs. Other agencies include the following:

Even the DOF estimated that potential government revenues of about 178 billion pesos were lost in 2016 due to redundant distribution of incentives to businesses.

The submission of TRABAHO implicates that businesses within their agencies will be required to follow these incentive criterias listed below, before they can receive support from the government:

Finance Secretary Carlos Dominguez made it clear that this needs to be done in order to modernize the fiscal incentive system within the Philippines. The catch is simple: All businesses will benefit from this bill, as companies would experience paying lower corporate income taxes since rates are going down — No incentives means low tax rates. In his statement, he mentioned:

“You know, incentives are like money we’re giving to people, because we are foregoing the collection of their tax. we want to make sure that the tax that we are foregoing which really comes from your pocket are given to companies that will improve the economy”.

Under TRABAHO, those projects that are registered under the SIPP or Strategic Investment Priority Plan as defined by the BOI, could become granted with incentives such as:

Aside from lowering income taxes and fiscal incentives, TRABAHO also plans to increase taxes on alcohol and tobacco products as well as mining in areas outside of government-classified mineral reservation spots.

The bill also plans to impose higher taxes on underperforming educational and health institutions from 15 to 20 percent, in lieu of the 10% tax rate. Evaluation of schools and hospitals would be determined by government sectors such as Department of Education, Commission on Higher Education and the Department of Health.

August 13, 2018 — After passing at the House Committee Level, TRABAHO bill is set for plenary deliberation and approval.

Whether you’re an individual or non-individual taxpayer, JuanTax can help you in simplifying the way you generate and file your local taxes!

JuanTax is a Philippine-based cloud tax software that helps businesses in achieving compliance with the Bureau of Internal Revenue (BIR) when it comes to transactional taxes including VAT, Percentage Tax and Expanded Withholding Tax.

Since JuanTax is tax reform ready, rest assured that our tax software lets you know the correct tax forms to file — based on your business details and tax type, in line with the provisions of TRAIN law, freeing you from the dilemmas of understanding the laws of TRAIN and other provisions of tax reform — Just generate and file your tax returns and that’s it!

Stay tuned for more updates as we’ll keep you posted with developments surrounding TRABAHO. In the meantime, you can generate and file your taxes using JuanTax. Feel free to visit our website at https://juan.tax/ and Sign Up for a free trial.

DOF expects P62 B from TRAIN 2