And it’s a wrap! JuanTax successfully hosted its 2nd Annual Online Convention last October 29, 2021, with over 1,300 attendees from various parts of the Philippines. 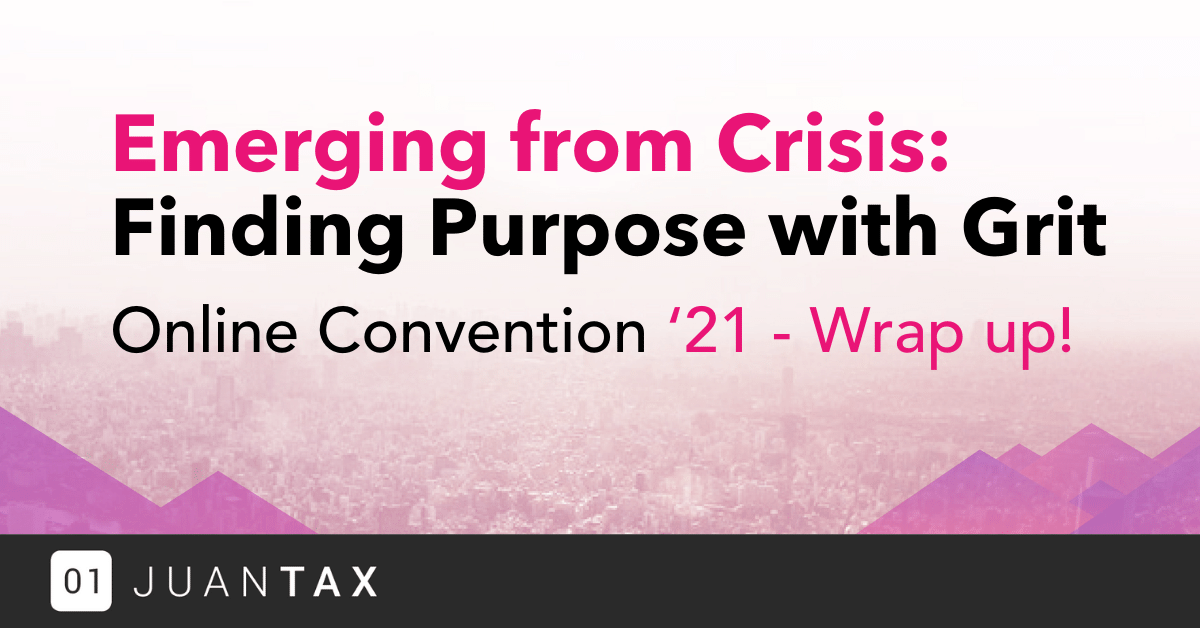 With the theme of EMERGING FROM CRISIS: Finding Purpose with Grit, this year’s convention was filled with insightful speakers, an engaging panel discussion, and very interactive attendees which made the event truly a blast!

As an Accounting Intern, I have been used to attending webinars that are filled with lectures and ones that would plainly talk about the serious, business stuff. JuanTax Online Convention was my first time experiencing a convention that had speakers talk not just simply about going from point A to point B but instead, they spoke about their experiences on how there are actually several different pit stops in life, each one allowing you to feel various emotions and molding you to become a better version of you, for your future self. They talked about grit and how it allows you to surpass obstacles and become stronger, about finding one’s purpose in life, and about achieving success amidst all the struggles.

For the Opening Keynote, Mr. Ardy Abello talked about golf, and initially, I thought I wouldn’t be able to connect with him because what do I know about golf? But then he made it simple. He talked about how golf is all about focus and that instead of looking at the sand traps, you have to direct your attention to the flags up ahead. He said that just like in golf, we would also encounter sand traps in our lives that could distract us from our target so it is important that we remember to always redirect our focus on our goal and our purpose.

After that, Mr. Cesar Wee Jr. started the spotlight session by sharing his experiences as an entrepreneur, especially the struggles that he initially had with his family business. For him, we should appreciate all the challenges that we encounter because the lessons that it holds are the pieces in building one’s success. Ms. Katherine Castro, on the other hand, began her speech by saying “Forget passion if you will not be persistent,” she said being passionate is not enough to make your dreams come true, that you need effort, and grit to pursue it no matter what the cost. Lastly, Dr. Rex Bacarra put great importance on knowing the kind of life you have lived, because as he said, “All experiences are interconnected to make a better version of yourself. Difficulties will make your success more meaningful.”

Led by Mr. Ron Castro, the Chief Revenue Officer of JuanTax, the highlight of the event was the panel discussion where the speakers further discussed each other’s sharings and emphasized that the idea of grit is to emerge from a crisis stronger and more empowered than ever before.

You can tell that the attendees did not just listen to the talks but it was obvious that they were also greatly moved by the sessions seeing from the great number of messages and responses that flooded the zoom chat box from the start until the last minute of the convention.

Mr. Marvin Galang, CEO of JuanTax, then delivered his final remarks and announced that all proceeds from this event, amounting to PHP 170,000.00, will be donated to fund the School Text Blast, supporting about 70 schools and thousands of students with distance learning. Afterwards, Brother Bo Sanchez blessed the event with words of hope and delivered an inspirational message. His compelling words have shown that realizing your purpose will give you the strength to face all of life’s challenges. Marking the event’s closing with his quote, “If you have enough goals, you will have enough grit.”

The hype of the attendees continued throughout the Halloween party of JuanTax. It was a marvelous night filled with joy, showcasing various amazing costumes and wits of the participants through the games full of prizes. Indeed, it was a night to remember!

The event was a huge success which would not be possible without the event partners, sponsors, and organizers that exerted a great amount of time and effort to put forth such a wonderful affair that the convention even resulted in a 91% Net Promoter Score, indicating that the attendees were really satisfied with how the event turned out. And in the end, the goal of JuanTax was met, as the attendees were able to attain lots of positive key takeaways from the event. As the saying goes, “grit without purpose is useless,” we hope that we were able to help you in finding your purpose as we emerge from the challenges of the pandemic.

Accounting in the Retail Industry: The Challenges and Their Solutions
Jun 27, 2022

Celebrate your money wins no matter how small they are
Jun 20, 2022

Traditional vs. Modern Day Accountants: Which One Are You?
Mar 02, 2022