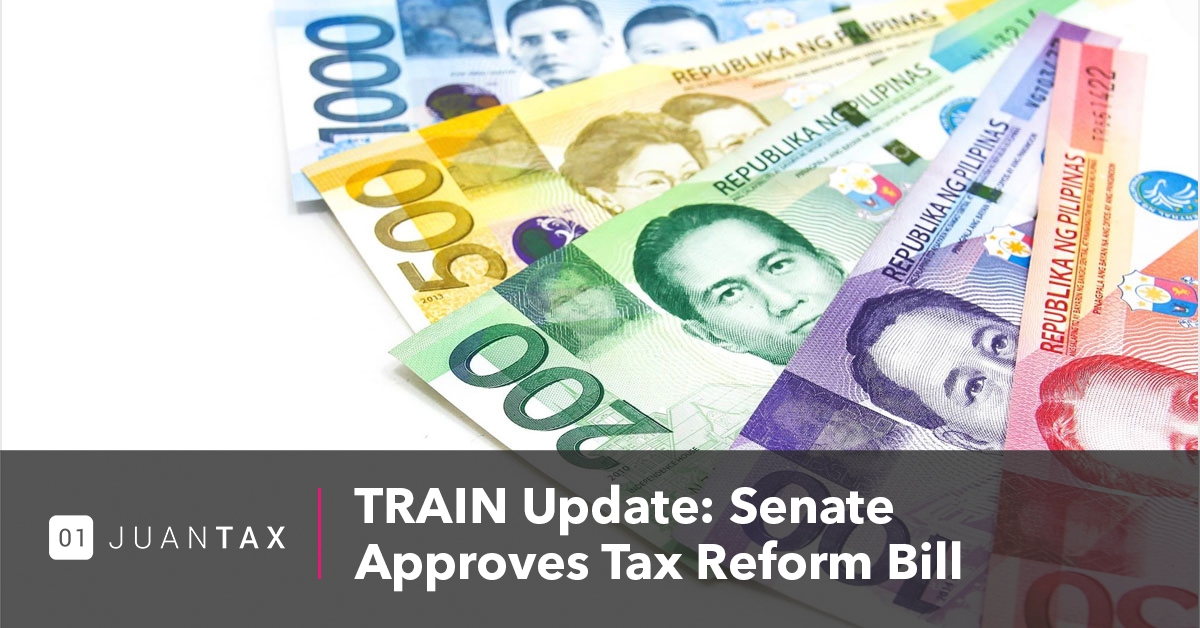 December 19, 2017 — Tuesday — After being ratified by both the Senate and House of Representatives, the first package of the Tax Reform for Acceleration and Inclusion (TRAIN) has now been signed into law by President Rodrigo Duterte. As expected, this tax package is set to be implemented by January of 2018.

In Ratifying the Bill

Despite many differences between the proposed bill versions by both the Senate and House of Representatives, the main goal in ratifying the provisions of this act were focused not only in restructuring the Philippine’s tax system, but also in providing simple yet fair taxes for Filipinos.

The government is also expected to achieve an estimated revenue of about ₱130 billion with this approved version of TRAIN law, now also known as Republic Act 10963.

Major changes were added to this new version of the comprehensive tax reform package:

This version of the tax reform bill is still exempting tax from the P250,000 annual income, and this time this would hopefully increase take home pays for workers under the compensation-based and self-employed section.

The bill had also approved an 8% flat tax when it comes to gross sales as well as receipts for self-employed individuals.

Yet another controversial issue since the passing of this tax bill is the excise taxes levied on sweetened beverages.

Under this provision, taxes will be imposed on drinks using artificial sweeteners (both caloric and non-caloric) (P6/liter), as well as beverages using high fructose corn syrup (P12/liter).

In the meantime, other beverages like milk, 3-in-1 coffee and any other forms of natural juices are tax-exempt.

Changes were also made when it comes to excise taxes imposed on petroleum, as new tax brackets were made for products such as diesel, LPG and gas.

Other tax rates were imposed as follows:

Others exempted in this new provision are products which are used for feedstock, replacement fuel and raw material (petrochemical) purposes.

New tax rates were also implemented when it comes to excise taxes imposed on automobiles:

Cars exempted from this provision are pick-up trucks and electric vehicles.

This version of TRAIN also has it’s eyes set for a new bracket of tax rates imposed on coal:

VAT exemptions will be maintained for the following taxpayers/business Industries:

Other Provisions of the Bill